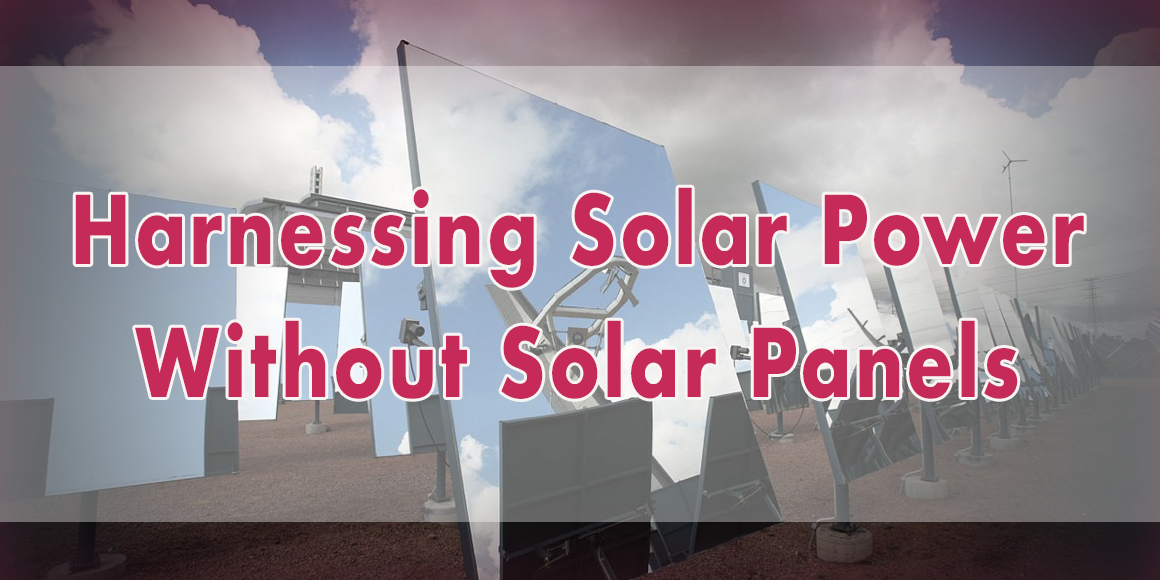 Solar power is at the forefront of the renewable energy revolution. This form of power typically relies on photovoltaic solar panels that capture sunlight and convert it into electricity. However, there are other ways to harness solar power without using solar panels.

Traditional solar panels function by letting photons from sunlight to knock electrons away from atoms. The movement of these electrons generates electricity that can be stored or sent to the grid. This form of solar power relies on the photons in light for creating power.

Another method for generating solar power known as “concentrated solar power” (CSP) relies on the heat from sunlight to generate electricity.

Concentrated solar power (CSP) stations are located in warm regions that receive ample sunlight throughout the year. These stations feature hundreds, if not thousands of outdoor mirrors that are arranged so that they all reflect sunlight onto a small area.

This “concentrated” sunlight is used to heat molten salt located inside a central tower to 1050°F. The molten salt is then stored in a large insulated tank where its heat is used to make steam. This steam is then used to rotate a turbine and generate electricity.

CSP’s method for creating power is more similar to the one used by conventional power plants than solar panel farms. It is essentially a form of thermal power that relies on sunlight. Due to this reason, concentrated power stations are usually found in regions that are hot and dry, such as deserts.

Concentrated solar power offers many advantages over traditional photovoltaic solar panels. These include:

Concentrated solar power stations are more efficient at generating electricity compared to photovoltaic solar panel farms. CSP technology has an estimated efficiency of up to 25%, while solar panels have an efficiency between 15% to 20%.

Another advantage CSP enjoys over traditional solar power is the ability to store energy for long periods. CSP systems store energy using thermal energy storage technologies. This enables CSP plants to use the residual heat from the molten salt to generate electricity at night.

By contrast, storing energy generated by traditional solar panels is a lot more difficult. Electricity produced by these panels is usually stored in batteries. However, this process can be difficult as these batteries may not have the ability to handle and store large quantities of electricity

CSP plants currently exist in many different countries. This technology should continue to grow in popularity in the future. However, it is unlikely that this CSP will replace traditional photovoltaic solar panel farms.

This is because CSP is competing with natural gas and other thermal power plants as opposed to solar farms. In the future, CSP could play a larger role in helping us generate clean energy on a large scale.